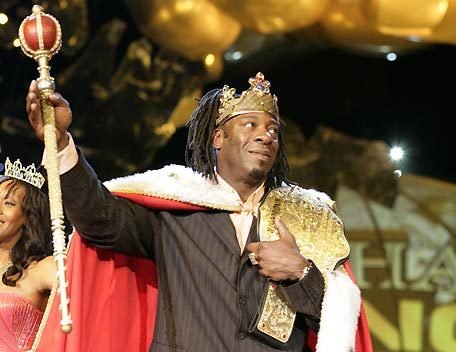 This is my return to blogging! I needed a reason to return to this. Last year was a good year for me, socially. I did less than I previously did in 2016, but this year was a redemption year.

I no longer go by New Year’s Resolutions; Only New Year’s Themes. There’s a couple I wanted to work on this year. Independence. Confidence. Failure…

This is the 3rd New Years post I’ve done with a wrestler as a New Year’s theme. 1st year, Shawn Michaels. 2nd year, Shinsuke Nakamura, This year? Booker T. Now let’s start of with Failure. Not going to lie to you. Scared of it. Don’t know one person that likes it. Everything that I do, there’s a voice in my head that says: What if you fail at this? If I don’t, I’m fine…for the moment. If I struggle, Why are you doing this? If I do, the floodgates start to come. Doesn’t mean the dam will break: but I have my fair share of cracks and holes.

Booker T didn’t come from the best background living in Texas: his mother died when he was young and he got arrested for armed robbery. Would that make someone a failure?

I struggle with having confidence for as long as I could remember. I know what it looks like on the outside, but as I look for it inside myself, might as well have a blindfold on.

All wrestlers need a certain confidence about themselves for their character to work. Especially Booker T. Going from GI Bro, to Booker T, to King Booker could not have been an easy feat. Especially being in a profession where you are in the minority.

Independence. This is a tough one here. I’m in my mid- twenties. I want to be out exploring the world. I’ve appreciated everything my family has done for me. At the same time, I want to be my own man. When & where do you draw the line between family obligations and your own? Necessarily don’t want to be a bird that turns into an overcooked turkey.

Even Booker T had to leave Harlem Heat in order to become a 6 time World Champion and a Hall of famer.

Here’s a Fourth one: Self-Reassurance. No more hand holding, obviously. It’s hard to tell yourself everything is going to be alright when there’s no control…

So here’s two questions that you & I can take from Wrestling: What’s your gimmick & how are you going to be a champion?